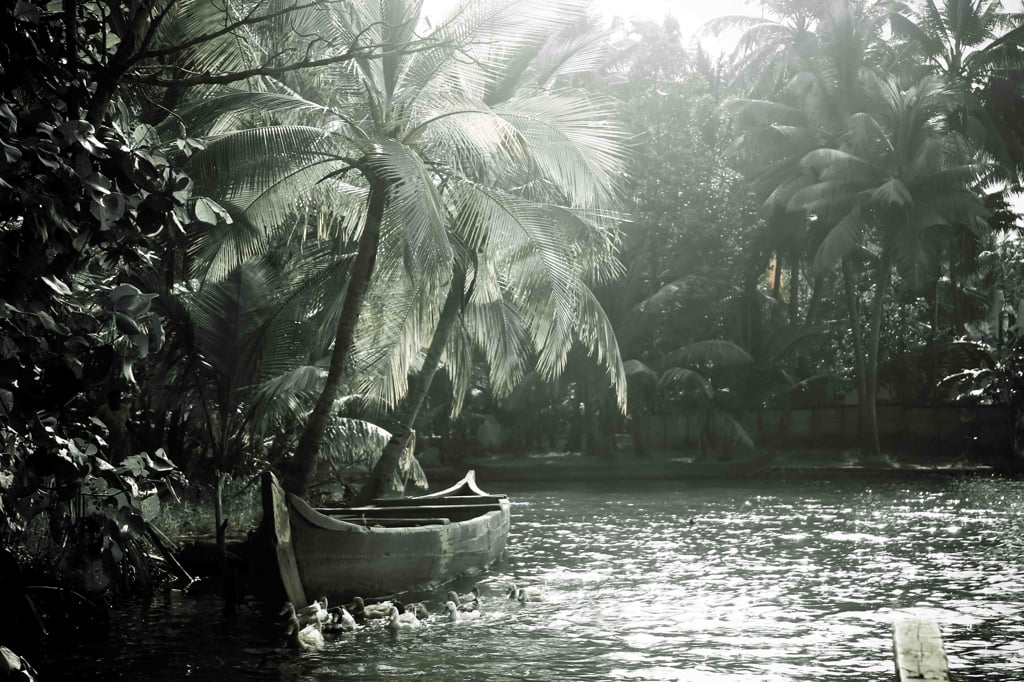 As soon as we got up sunday morning at Varkala, we decided to go beach for a sun bath. Our plan was to leave for kollam by 11A M .Varkala is clean and clear beach ,best for sun-bath.I was truly amazed of the way the beach was maintained by kerala people and government.we found few people doing some rituals under big umbrella shades. Where as foreigners enjoying ayurvedic message in their bikinis .

Few people were doing surfing also. As we entered the water,we realized the beach is not flat  with many up and down.For me It was like an escapade walk  🙂 Almost spending 20 min ,i came back to take rest on the sandy beach.Suddenly my sister shouted “See Dolphins”.First I thought she is joking,than i couldn’t believe  my eyes..Oh my God!! A group of dolphins proposing in the water at just 200 m from the shore.It was a lovely view.With sunlight reflecting on the blue water ,doplhins were shinning beautifully. A picturesque moment!!! We took breakfast at the beach.I enjoyed banana pancake with some hot Honey-ginger-lime pot.The restaurants over there serve a good number of English/continental breakfast which includes croissant,french baguette,scrambled egg and a varieties of fresh juice and hot-drinks.You won’t get any of the south-indian breakfast there. Thank God!! i was happy of not seeing Idly and Dosa in the menu.

By 12.30 PM we took the road via Kappil beach and headed towards kollam , a city on the banks of the Ashtamudi lake that took on the title God’s Own Country without much demur. Kollam is the fourth-largest city after Thiruvananthapuram, Kochi, and Kozhikode .Its 35 km from Varkala .As soon as i saw the beautiful Kappil beach,i was speechless.The most cleanest beach i have ever seen and there was only a ice-cream stall except we four.My sis got down from car and ran towards ice-cream stall like a kid 😉 And i ran into the water,I can’t express the feeling.Felt like i am somewhere outside India !! After a long photo-session we went to Kolam, Our next plan was to visit Munroe island after a good lunch.Had a traditional lunch at Allspice restaurant.One should not miss this place,they serve a good number of bakery stuff too except kerala and chiness food.Their kerala style chicken biriyani was just awesome.It was 3pm when we ended our lunch with fresh strawberry pastry..Yummy !!

Without delaying a minute,we followed our GPS path to munroe island .It took around an hour to reach there where we started our canoe tour with vijeesh’s sturdy canoe.I really cherish that tour ,the channels are narrow and you get closer to the villages and its people.It was a three hour canoe tour and my sis got punting lesson from him 😉 Vijesh shared many thing about Monroe Island and made our trip fully entertaining. After spending time through canals and villages ,we said goodbye to munroe island.And everyone of us thinking to visit that place again. Next plan was to go to our friend’s wedding at Kollam. Those who wants to spend their days in Vijesh’s Munroe island Homestay

I was so excited to see a traditional kerala marriage .As we greeted the groom and bride,they gave us lemons,part of their tradition.Than we were served with delicious food for diner. Their welcom drink was black coffee.I started my food with some hot appam and mutton stew 🙂 Unlike our wedding party,their party ended around 9.30pm. Wishing the newly wedded couple a good life,we returned back to Varkala.

Next day morning I enjoyed my tea in the bamboo gazebo that is in the artificial pond of the resort. The resort is well maintained by the staff . By 12PM we left Varkala and started our return journey. We had a truely traditional kerla lunch at a place ,which was run by a old couple.It was amazing food .We went Minakshi temple in Madurai on our way.It was my second time to Madurai temple, and in the mean time the temple authority has defined some rules for the devotees for darshan .Anyways we got a quick darshan in the special line. After that delightful darshan ,we had dinner and lovely dessert at “Puppy’s Bakery”.Reached bangalore by 4AM in the morning !!

Seven things to do in Vagamon , Winter Vale Green Stay